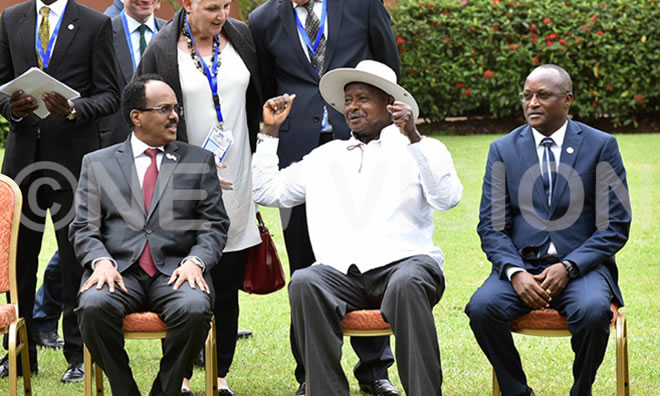 Left to right: Mohamed Abdullahi Mohamed, President of the Federal Republic of Somalia,  President Yoweri Museveni and Gaston Sindimwo, First Vice President of Burundi interacting with the US Ambassadors to Uganda Deborah Malac during the Summit of the Troop Contributing Countries to the AMISON. This was at Speke

Somalia and the African Union Commission (AUC) have commended President Yoweri Museveni’s decision to deploy troops in Somalia 10 years ago when everyone else shunned the idea.

Somalia’s President Mohamed Abdullahi Mohamed noted that President Museveni’s decision and his commitment to achieve peace in Somalia are some of the decisions the people of Somalia will for long be indebted to him.

“I believe AMISOM is succeeding but we have a long way to go. We need to collaborate and continued funding to defeat Al Shabab,” he said.

They made the remarks during the Summit of the Troop Contributing Countries (TTCs) of the African Union Mission in Somalia (AMISOM) held on Friday under the chairmanship of President Museveni.

The Summit, convened by President Museveni was within the framework of the conclusions of a September 2017 meeting in New York. The meeting was held in the wake of the challenges AMISOM was facing, characterized with a mismatch between mission ideas and resources

In his remarks President Museveni called upon the United Nations Security Council not to repeat previous mistakes made in Somalia if the country is to realise lasting peace.  “If we do things right, chances are Somalia will be much better anytime soon. Let us avoid new mistakes,” he said.

During the summit, the TTCs in a communique agreed to recall the UN Security Council Resolution 2372 (2017). The main thrust of the resolution was the phased reduction and draw-down of AMISOM troops by 2020.

The TTCs Kenya, Ethiopia, Djibouti, Burundi, Uganda and Somalia noted that the timeframes and troop levels under the UN Security Council Resolution are not realistic and that would lead to a reversal of the gains made by AMISOM.

Uganda contributes over 6000 troops to the mission and was the first to deploy in Somalia.

The Summit was attended by a number of dignitaries including US ambassador to Uganda, Deborah Malac; the President of Somalia Mohamed Abdullahi Mohamed and Gaston Sindimwo, the first vice-president of Burundi.

scroll to top
By continuing to browse the site you are agreeing to our use of cookies.